You are here: Home / Available Adoptions / Shrimp
UPdate 5/7: Shrimp had her first heartworm shot 4/30 and will have her next at the very beginning of June. Shrimp is settling in well, but does have a severe case of heartworm making her high risk during her treatment.

Shrimp was found near the Port Of  Tampa and spent a week on a shrimp boat there before making her way to FEBR. Shrimp was very skinny upon arrival and we found had hookworms, tape worms and sadly tested postive for Heartworms. She has now begun the 3 month treatment for heartworms. which would likely wrap up by late June. She is a petite female english bulldog weighing in at only 36 pounds! She is very sweet and 100% housebroken. Not surprising that due to her past she is very food aggressive toward other dogs and should be fed seperately. 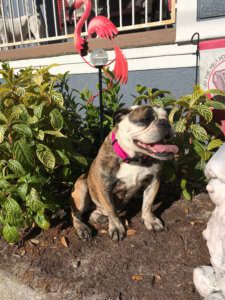 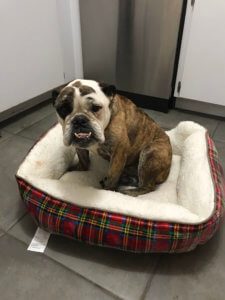